Headlines of the day: The worm has turned at Fox

The two lead stories on the New York Times as we write, starting with this:

O’Reilly Out at Fox News as Harassment Claims Pile Up

How Trump could cause a 21st Century witch hunt

Way back when esnl was an undergrad majoring in anthropology, one of our professors relentlessly hammered in one point: People are territorial group animals just like chimpanzees, our closest primate cousins [the bonobo hadn’t be recognized yet as a separate species even closer to us than chimps].

We also know that violence breaks out among chimps when resources are scarce and groups come into conflict.

We’ve also learned that humans who see themselves and their groups under threat can respond in those same primal ways.

And history teaches us that demagogues with dark agendas can exploit those same instincts to enhance their own positions of power by targeting popular anger towards the weak and those readily distinguishable from our own groups.

Some of our first television memories, after we got one of the first sets in town when we were six years old, was of the Army/McCarthy hearings, when a right wing demagogue in the Senate who had built a career out of whipping up fear of communists finally past the point of no return.

And now, with Donald Trump in the Whoite House the stage may be set for another witch hunt, writes Peter Neal Peregrine, Professor of Anthropology and Museum Studies at Lawrence University in this essay for The Conversation, an open-source academic journal written in everyday English:

As an anthropologist, I know that all groups of people use informal practices of social control in day-to-day interactions. Controlling disruptive behavior is necessary for maintaining social order, but the forms of control vary.

How will President Donald Trump control behavior he finds disruptive?

The question came to me when Trump called the investigation of Russian interference in the election “a total witch hunt.” More on that later.

A common form of social control is ridicule. The disruptive person is ridiculed for his or her behavior, and ridicule is often enough to make the disruptive behavior stop.

Another common form of social control is shunning, or segregating a disruptive individual from society. With the individual pushed out of social interactions – by sitting in a timeout, for example – his or her behavior can no longer cause trouble.

Ridicule, shunning and other informal practices of social control usually work well to control disruptive behavior, and we see examples every day in the office, on the playground and even in the White House.

Donald Trump routinely uses ridicule and shunning to control what he sees as disruptive behavior. The most obvious examples are aimed at the press. For example, he refers to The New York Times as “failing” as a way of demeaning its employees. He infamously mocked a disabled reporter who critiqued him.

On the other side, the press has also used ridicule, calling the president incompetent, mentally ill and even making fun of the size of his hands.

Trump has shunned the press as well, pulling press credentials from news agencies that critique him. Press Secretary Sean Spicer used shunning against a group of reporters critical of the administration by blocking them from attending his daily briefing. And Secretary of State Rex Tillerson shook off the State Department press corps and headed off to Asia with just one reporter invited along.

Again, the practice cuts both ways. The media has also started asking themselves if they should shun Trump’s surrogates – such as Kellyanne Connway – in interviews or refuse to send staff reporters to the White House briefing room. 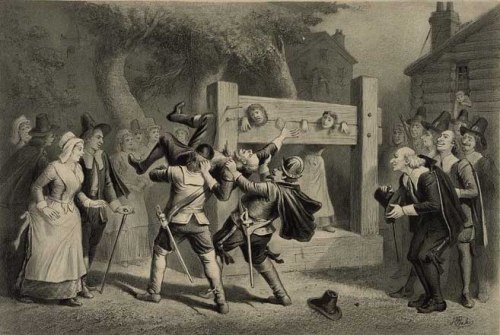 But what happens when informal means of control don’t work?

Societies with weak or nonexistent judicial systems may control persistent disruptive behavior by accusing the disruptive person of being a witch.

In an anthropological sense, witches are people who cannot control their evil behavior – it is a part of their being. A witch’s very thoughts compel supernatural powers to cause social disruption. If a witch gets angry, jealous or envious, the supernatural may take action, whether the witch wants it to or not. In other words: Witches are disruptive by their very presence.

When people are threatened with an accusation of witchcraft, they will generally heed the warning to curb their behavior. Those who don’t are often those who are already marginalized. Their behavior – perhaps caused by mental disease or injury – is something they cannot easily control. By failing to prove they aren’t a “witch” – something that’s not easy to do – they give society a legitimate reason to get rid of them.

END_OF_DOCUMENT_TOKEN_TO_BE_REPLACED

Headlines of the day: Surrealism in TrumpAmerica™

Today a collection of headlines form the London Daily Mail, revealing the surreal nature of life under President Pussygrabber:

We begin with a cancelled celebration:

Next up, cause for cabinet paranoia in Big Brother’s world:

White House has eyes and ears in cabinet agencies: ‘Special assistants’ sit near secretaries’ offices and report back to the West Wing

‘I have no information that supports those tweets’: FBI Director Comey knocks down Trump’s claim Obama tapped his phones at Trump Tower – but there IS a probe into collusion with Russia

Trump says Democrats ‘made up’ story about his campaign’s Russia ties: ‘This story is FAKE NEWS and everyone knows it’

And to close, calling a spade a spade:

Fareed Zakaria accuses President Trump of ‘bulls***ing’ his way to the White House after spending his ‘whole life bulls***ing’, in foul-mouthed rant on CNN

Oh, and here’s the video of Zakaria’s interview:

Yep, in our Blood on the newsroom floor posts, we’ve tracked the slow death of American newspapers as subscribers abandon dead tree journalism for the wilds on the online world.

But print has been undergoing a revival, at least at the New York Times, where subscriptions for the digital and print versions are on the rise, and one man is responsible: President Pussygrabber.

Every time the execrable occupant of the White House tweets something nasty about the Gray Lady, subscriptions soar.

Or, rather, his thin-skinned, paranoid response to news slipping out the White House.

To stop the leaks, he and his henchmen created a special squad, including ex-CIA operatives and a former FBI agent and prosecutor, to stop the leaks.

Humorously, someone dubbed them the Plumbers Squad, and the name stuck. They wiretapped reporters and their suspected sources, including Nixon’s own National Security Advisor, then made the fatal mistake of busting into the Democratic Party headquarters in the Watergate complex, where they were caught and subsequently tried and convicted, the first of many jail sentences that would reach all the way to top, sparing on Nixon himself, who was parted by the successor he appointed.

We can’t help but wonder if the current occupant of the White House isn’t headed down the same road, because he’s exhibiting an even more overt case of hostility toward the Fourth Estate.

Current and former officials said that in a departure from past practice, access to a classified computer system at the White House has been tightened by political appointees to prevent professional staffers from seeing memos being prepared for the new president.

And at the Department of Homeland Security, some officials told Reuters they fear a witch hunt is under way for the leaker of a draft intelligence report which found little evidence that citizens of seven Muslim-majority countries covered by Trump’s now-suspended travel ban pose a threat to the United States.

Washington career civil servants say the clampdown appears designed to try to limit the flow of information inside and outside government and deter officials from talking to the media about topics that could result in negative stories.

We see trouble ahead, and not just for the press.

The results of a new survey offer of the authoritarian streak in Republican politics, with a near-majority calling from suppression of criticism of their elected corporate shills and nearly a third refusing to support another constitutional right, non-violent protest:

Headline of the day: Trump’s Jonesing for chaos

From Der Spiegel, Germany’s leading news magazine, the headline over a profile of an American phenomenon:

Right-wing radio host Alex Jones is America’s top conspiracy theorist. He has millions of listeners, but his most powerful one happens to be the president of the United States. DER SPIEGEL takes you inside his media empire in Austin.

If you haven’t heard of Alex Jones, you’ve been living a sheltered life.

But what Alex Jones believes in are crazy conspiracies.

As when he claims the Sandy Hook Elementary School shooting wasn’t really the murder of 20 students, sic teachers and staff by a mentally ill man who shot his mother before heading for school, where he saved the last bullet for himself.

As the New York Daily News reported during the presidential campaign, when questioned about his theory, Jones doubled down:

Jones. . .reaffirmed his debunked conspiracy theories that Sandy Hook Elementary “was closed years before” the shooting; that CNN anchor Anderson Cooper reported on the shooting “using a green screen” and that “weird videos” revealed that grieving parents were in fact actors.

Here’s Jones at his best, in a bizarre anti-Hillary rant during the campaign, aired life on his online show, which is also carried by more than 80 radio stations in the U.S.:

A look at his audience

Alexa reports that Jones’s website is currently averaging about 8.7 unique visitors a month, though numbers were much higher as the presidential campaign ramped up, as shown in this Alexa graphic charting the rise of the website compared to other websites:

A look at Quantcast’s analysis shows that his audience is heavily weighted toward older white males, especially those earning over $150,000 a year.

But what’s most interesting is the nature of his audience, specifically those with the strongest affinity for Jone’s screaming sense of menace.

They are solders and cops. . .folks trained in the art of shooting to kill:

And now for a look at how Jones appeared to the Der Spiegel reporter:

Alex Jones, 43, is the biggest conspiracy theorist in the United States. In the past, Jones had been labeled as a loony, marginal figure. But now, as he says, he is in regular contact with the president and feeds him his ideas. “Trump and I have talked several times since the election – about freedom and our common goal to destroy our enemies.”

The times have changed in America. Since November, loony, marginal figures have shifted closer to the mainstream, and in the days of alternative facts people with a bizarre worldview suddenly become influential media figures. There is no one this applies to more than Jones.

Jones offered Donald Trump his determined support during the election campaign — and now the president of the United States is his most powerful fan, giving him a direct line to the White House. “Your reputation is amazing,” Trump raved when he was a guest on Jones’ show during the campaign. “What you’re doing is epic. It’s George Washington level,” Jones said, returning the compliment.

It was already cause for dismay at the time that Trump was aligning himself with Alex Jones, a man who has said a lot of crazy things throughout his life. For example, he believes the government possesses weather weapons it can use to create artificial tornadoes. He’s convinced gay marriage is a conspiracy by a global secret society “to encourage the breakdown of the family” and “to get rid of God.”

We’ll leave you with this from the New York Daily News:

Trump told Jones he “won’t let him down” when he appeared on his show via Skype at the end of last year.