Two new studies from Wake Forest University’s Center for Amazonian Science and Innovation based in Tambopata, Perú reveal profound changes in the lands along the shores of the world’s longest river and the mountains that feed it.

The first study examines the profound and expanding impacts of the quest for gold as forests are felled at an accelerating rate and the land left poisoned by mercury used to extract the precious metal.

Small-scale gold mining has destroyed more than 170,000 acres of primary rainforest in the Peruvian Amazon in the past five years, according to a new analysis by scientists at Wake Forest University’s Center for Amazonian Scientific Innovation (CINCIA).

That’s an area larger than San Francisco and 30 percent more than previously reported.

“The scale of the deforestation is really shocking,” said Luis Fernandez, executive director of CINCIA and research associate professor in the department of biology.

The scientists at CINCIA, based in the Madre de Dios region of Peru, have developed a new data fusion method to identify areas destroyed by this small- or artisanal-scale mining. Combining existing CLASlite forest monitoring technology and Global Forest Change data sets on forest loss, this new deforestation detection tool is 20-25 percent more accurate than those used previously.

Both CLASlite and the Global Forest map use different kinds of information from light waves to show changes in the landscape. “Combining the two methods gives us really good information about the specific kind of deforestation we’re looking for,” said Miles Silman, associate director of science for CINCIA and director of Wake Forest’s Center for Energy, Environment, and Sustainability (CEES). Silman has researched biodiversity and ecology in the Western Amazon and Andes for more than 25 years.

Artisanal-scale gold mining has been hard to detect because its aftereffects can masquerade as natural wetlands from a satellite view. But the damage is extensive. Small crews of artisanal miners don’t expect to hit the mother lode. Rather, miners set out to collect the flakes of gold in rainforest.

“We’re not talking about huge gold veins here,” Fernandez said. “But there’s enough gold in the landscape to make a great deal of money in a struggling economy. You just have to destroy an immense amount of land to get it.”

To get the gold, they strip the land of trees or suck up river sediment, and then use toxic mercury to tease the precious metal out of the dirt. The results are environmentally catastrophic. 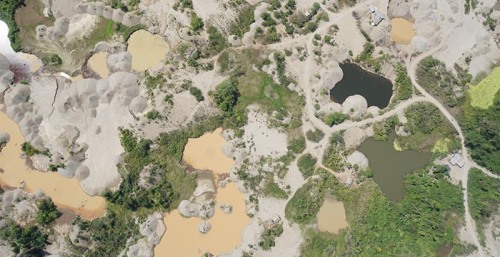 Aerial view of the damage inflicted by miners along the upper reaches of the Amazon in Peru.

Artisanal-scale gold mining took root in the Peruvian Amazon in the early 2000s, coinciding with construction of a new modern highway connecting Peru and Brazil. The Interoceanic Highway made Peru’s once remote rainforest and protected lands accessible to anyone. Where it used to take two weeks by all-terrain vehicle to travel from Cuzco to Puerto Maldonado, the capital of Madre de Dios, during the rainy season, it now takes only six hours aboard an air-conditioned luxury bus.

Because artisanal-scale gold mining requires no heavy machinery and thus involves minimal outlay, it has provided a revolving-door opportunity for poor workers from the Andean highlands to seek their fortune in Madre de Dios. When they return home, they leave a patchwork of mercury-polluted ponds and sand dunes, the landscape denuded of trees and most other vegetation.

CINCIA has partnered with Peru’s Ministry of the Environment to try to understand how the new tool developed by its scientists can be used to identify deforestation caused by artisanal-scale gold mining and take effective action to curb the damage.

“We want to integrate high-quality scientific research into the processes the government is using for environmental conservation in Madre de Dios,” Fernandez said.

CINCIA scientists also are studying native species that can be used for post-mining reforestation. The 115-acre experiment at CINCIA’s headquarters is the largest in the Americas.

From Wake Forest News comes this animation showing rate rate of deforestion since 1985:

Deforestation Sequence in the Peruvian Amazon

This animation shows the deforestation in the Peruvian Amazon from 1985 to 2017. Video courtesy Wake Forest University’s Center for Amazonian Scientific Innovation.

As the planet heats up, temperatures in the Amazon’s headwater’s are rising as well, with the heat already showing impacts on the region’s tropical forestdriving them to new heights, mountainous heights.

And that’s bad new for the ecology of lower elevations left behind.

Tropical and subtropical forests across South America’s Andes Mountains are responding to warming temperatures by “migrating” to higher elevations, but probably not quickly enough to avoid loss of biodiversity, functional collapse or even extinction, according to a new study published November 14 in the journal Nature. [$8.99 for short-term access].

The study, supervised by University of Miami researcher Kenneth J. Feeley, was co-authored by Wake Forest biologists Miles Silman and William Farfan-Rios, and used much of the field data they have collected in the Andean forests. Feeley began developing the techniques used in this research when he was a postdoctoral associate at Wake Forest. He also studied at Wake Forest as an undergraduate.

The study confirms for the first time that, like many other plant and animal species around the world, tree species from across the Andean and Amazon forests of Colombia, Ecuador, Peru and northern Argentina have been moving to higher, cooler elevations. But unlike the world’s more temperate or boreal forests, which are far more accustomed to dramatic seasonal shifts in temperature, tropical trees are running into environmental roadblocks at higher elevations that are thwarting their upward migration and threatening their survival.

“In the Andes, the ecosystems can change very fast and very dramatically, for example, from sunny and dry premontane forests to sopping-wet cloud forests. These changes, called ecotones, appear to be blocking species migrations,” said lead author Belén Fadrique, a University of Miami Ph.D. candidate who designed and carried out the study with Feeley, her advisor and UM’s Smathers Chair of Tropical Tree Biology. “These ecotone barriers make it hard for plants to relocate their populations—and if they can’t relocate, they will go extinct.”

For the Nature study, the researchers set out to answer a scientific call to include more tropical plants in the studies that investigate and predict the effects of climate change—the very call that Feeley and his fellow tropical biologists have been issuing for years because, as he notes, “the tropics include most of the world’s species and we know next to nothing about what those species are doing or how they are responding to climate change.”

Aiming to fill that void, the UM researchers joined forces with 18 other researchers from around the world to create a new database that tracks the livelihoods of thousands of highland trees on 186 plots of land across what is known as the Tropical Andes Biodiversity Hotspot.

Sitting at elevations from 300 to over 3,000 meters above sea level, the plots, most of which are about the size of an American football field and have been inventoried multiple times over the past couple decades, are spread across Columbia, Ecuador, Peru, and Argentina.  Collectively, these forest plots contain an astonishing diversity—a total of 120 different plant families, 528 genera, and more than 2,000 tree species. That is more than double the species of trees than are found in all of the United States and Canada combined.

Using newly developed modeling techniques that combined the data from all the plots into a single comprehensive analysis, the researchers confirmed that, as temperatures in the high Andes rise due to global warming, heat-loving tropical trees are seeking more optimal conditions by migrating to higher and cooler altitudes. Consequently, the abundance of these heat-loving, or thermophilic, species is increasing on these plots through time while, in contrast, the abundance of cold-loving species is declining.

The researchers also were surprised to learn that, while this phenomenon of thermophilization is widespread across the Andes, the rate of the changes in forest composition are not uniform across elevations. They suggest “ecotonal roadblocks” may be, in part, responsible. In other words, as Andean species get pushed upslope by rising temperatures, they may quickly find themselves out of their comfort zones as other aspects of their habitat, such as rainfall and cloud cover, become intolerable.

“Everything is moving up the mountain so species on top of the mountain are running out of places to go and may soon face the risk of mountain-top extinction,” Feeley said.

Feeley and his colleagues have published other studies examining the effects of climate change on tropical forests in different areas, but none with such a broad continental scope. Which gives Feeley both confidence—and pause—over the study’s conclusion: “Andean forests must be added to the growing list of ecosystems and species that lack the ability to quickly and cohesively respond to climate change and thus face high risk of extinction, biodiversity loss, and functional collapse.”

Feeley and his co-authors hope to conduct follow-up studies that will analyze how climatic factors are impacting specific Andean species, many of which have not even been identified or named yet, and what the consequences will be if they are lost.